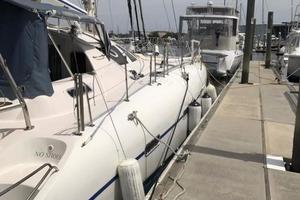 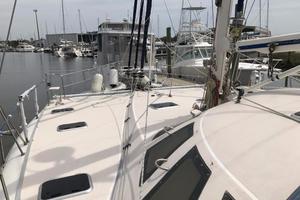 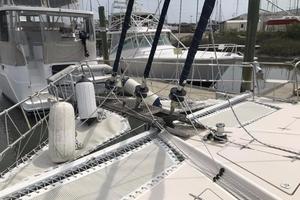 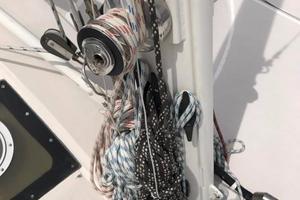 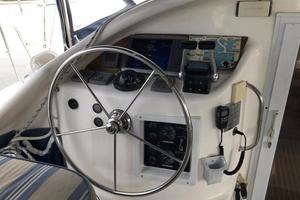 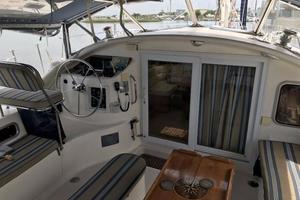 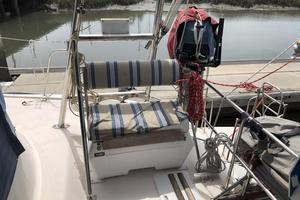 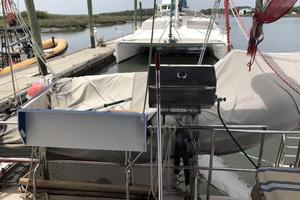 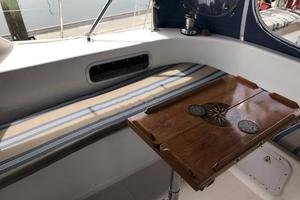 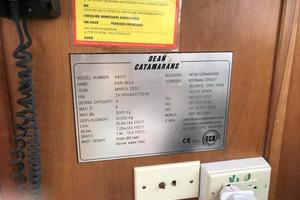 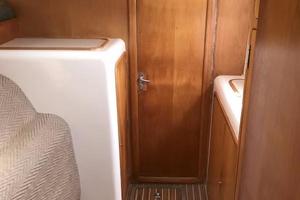 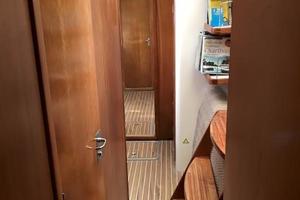 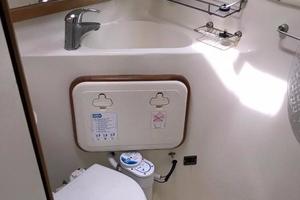 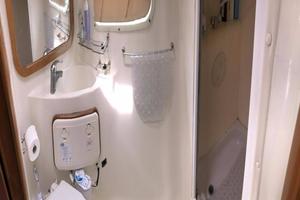 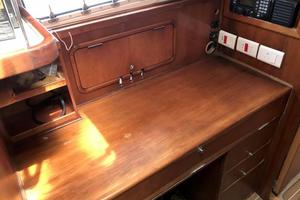 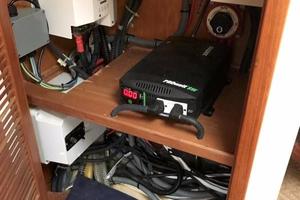 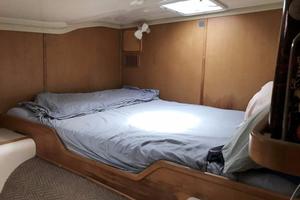 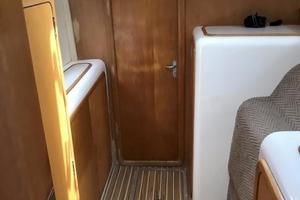 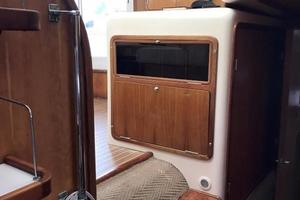 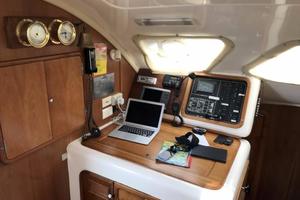 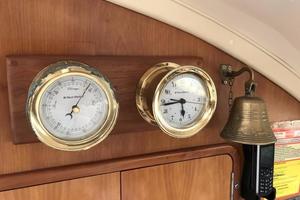 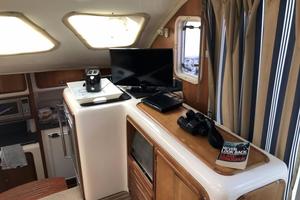 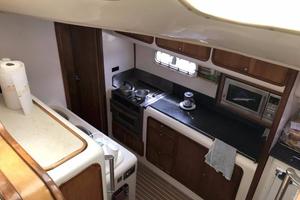 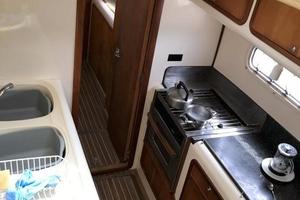 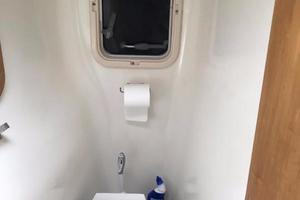 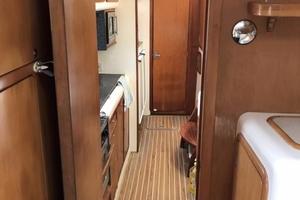 Stuart Yacht Sales would love to guide you through a personal showing of this 48' Dean 440 Custom 2002. This yacht for sale is located in St. Augustine, Florida and priced at $296,000. For a showing please contact us by filling out the form on this page and we will get back to you shortly!

Owners Comments:"In 2009 Kari Bela underwent a major refit at Sailcraft Marine, Oriental, North Carolina. The hull was extended both fore and aft. The traditional Dean Bow was fairly rounded and surfing down big ocean swells once you reached the speed of 16/17 knots there would be a “push back” effect. The bows were “sharpened” to get around this. A fixed teak bowsprit was added with two permanent furling systems for the screechers. Kari Bela was designed for blue water cruising which by implication means you are going down wind and the two “screechers” gave her the ability to goose wing very effectively. The railings were modified on the bows and additional netting added to give easier access to the furlers. At the same time the jib and mainsails were replaced and I moved to a behind the mast furling system using vertical batons. This gave us the ability to be flexible in our reefing and is ideal for short handed blue water cruising as the reefing can be carried out from the cockpit and doesn’t require the boat turning into the wind and is a lot easier. The masthead was shortened from 68ft to 63.5ft to enable us to utilise the inter-coastal waterway. During that refit the sugar scoops were extended as dive platforms and railings added. The Dean traditionally lacked buoyance aft and she tended to drag her bottom a little bit. The modifications were designed to overcome that tendency and to improve access to and from the water. One of my criteria was I wanted to be able to log 200miles a day either under sail or engine. We upgraded the engines to 50 horse (turbo) Yanmar and added large gori folding props. The forward hatches were modified and four 100 litre aluminium tanks were added with a fuel transfer pump to the main tank taking total fuel capacity to 1,000 litres. Kari Bela has a lot of electronics on board and I didn’t want to rely on the generator for daily charge. I installed a wind generator, replaced the solar panels and upgraded the batteries to 1400 amp hours. Sailcraft made modifications to the cockpit to allow me install a new Bimini with removable side and aft screens and Perspex “front windows”. As part of the refit I replaced the coach roof Perspex windows and added small hatches set into the Perspex to increase ventilation. We added new mattresses’ and closed cell cockpit cushions. The watermaker was relocated for ease of access to the aft port cabin. The cooker was replaced as was the microwave. Sailcraft built a new system for supporting the dinghy off the aft deck rather than rely on a simple hoist based system,. We installed two dinghy supports which swivel outwards to allow the dinghy to be lowered between them and installed clip on netting between the supports and on the sides. The dinghy supports are linked and supported by the aft rigging shrouds. This provides an additional “sunbathing” platform and an ideal platform for getting kit on and off the boat."

The Company offers the details of this vessel in good faith but cannot guarantee or warrant the accuracy of this information nor warrant the condition of the vessel. A buyer should instruct his agents, or his surveyors to investigate such details as the buyer desired validated.Photos may not properly reflect the current condition of the actual vessel offered for sale. In some cases stock photographs may have been used.

NOT FOR SALE IN US WATERS TO US CITIZENS/RESIDENTS

United Yacht Sales is pleased to assist you in the purchase of this vessel. This boat is centrally listed by The Catamaran Company. It is offered as a convenience by this broker/dealer to its clients and is not intended to convey direct representation of a particular vessel. The Company offers the details of this vessel in good faith but cannot guarantee or warrant the accuracy of this information nor warrant the condition of the vessel. A buyer should instruct his agents, or his surveyors, to investigate such details as the buyer desires validated. This vessel is offered subject to prior sale, price change, or withdrawal without notice. 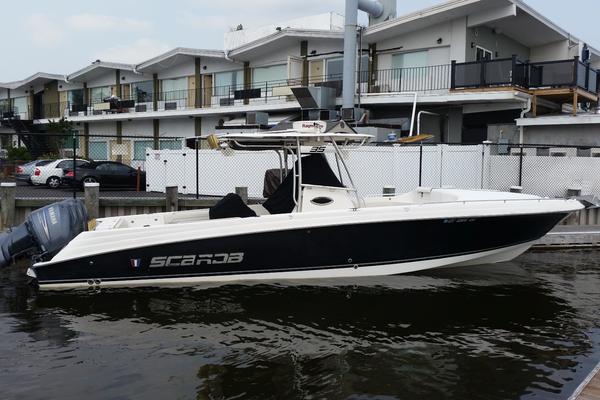