GREY MIST is now located in Fort Lauderdale until sold. A most serious seller is looking for all offers!Famous totally refit Camper & Nicholson 127' ClassicGREY MIST, a 127' yacht built by the renowned yacht builders of Camper & Nicholson, is a vessel filled with history and luxury. Launched at C&N yard at Gosport, England, GREY MIST has travelled the world's waters, participated in the largest navel evacuation in history at Dunkirk in World War II and has had aboard a variety of celebrities, business moguls, and lords and ladies.Able to sleep 14 adults in elaborate staterooms and entertain more with her massive salon, bar, and modern galley, GREY MIST goes beyond just your standard pleasure yacht. From 2003 to 2011 GREY MIST with her previous owner underwent an extensive refit upgrading all her major mechanical and electrical components and restoring all her luxurious accommodations. The current owner has again thoroughly restored this wonderful classic by installing (new John Deere Tier 3 13.5L engines and generators 80kW, water maker, electronics, new AC system (2 chillers), teak and holly flooring, teak decks, cabinets, granite counters and the list goes on and on.

Stuart Yacht Sales would love to guide you through a personal showing of this 127' Camper & Nicholsons Classic 1920. This yacht for sale is located in Fort Lauderdale, Florida and priced at $1,999,000. For a showing please contact us by filling out the form on this page and we will get back to you shortly!

GREY MIST provides accommodations that rival those of a classic hotel. With four large staterooms each with large walk around queen sized beds, plenty of hanging closet space, and private heads with stand alone showers, eight adults can have the privacy and space that one would expect from such an elaborate vessel. There is even another state room with bunk beds that sleep six, along with a private head and shower, which would be perfect for any children or young adults that join a stay. Each of GREY MIST's staterooms is covered with rich stained wood paneling with elaborate molding, and each private head has elaborate ornate sinks, top of the line electric heads, and Corian like solid surface covered showers. The galley has counter space and modern appliances that rival most houses enabling a full crew and guests to be easily catered to. Probably the most spectacular room onGREY MIST is the main salon/bar. In the center of the salon is a solid wood table surrounded by eight antique chairs. Surrounding the whole main salon are plush settee's with two large flat screen TV's at the end of each. At one end of the salon is the ships bar, with a large Mahogany surface forming the counter, two icemakers, refrigeration and rich stained wood cabinetry for plenty of storage space.

Aft of the entrance foyer is GREY MIST's galley. The galley is equipped with all modern appliances, plenty of granite counter space and ample storage.

Located on the lower deck, accessible by the stairs in the foyer, there are three large elaborately furnished staterooms for guests. The forward stateroom has a centerline queen berth, plenty of storage, and large head located forward with stand alone shower and sink. The next stateroom aft has two sets of bunk beds, a large closet, and private head with stand up shower. GREY MIST's final stateroom has a large centerline queen berth as well as plenty of storage and private head.

In 1919 the first blueprints for GREY MIST were written up for H.N. Anderson. A year later GREY MIST, #288, was finally completed by the ship builders of Camper & Nicholson at their yard in Gosport. In 1926 Sir John Archer K.B.E purchased GREY MIST and enjoyed her till 1934 when Harry Vincent took ownership. Then in 1939 Lady Maud Burton and her husband Ronald Rothbury Burton purchased her. Unfortunately war soon broke out and in 1939 GREY MIST was requisitioned by the British Royal Navy and participated in the Dunkirk Evacuation and was then used as a signal ship throughout World War II. After the war she was returned to Lady Burton and then sold in Southampton to Albert Batchelor in 1951, who took her out of the British Registry, and later renamed her Marina II in 1966. From there she became hard to follow until the present owners found her in 1993 in Dearborn, South Africa under the name Dorita. Her previous owner saw GREY MIST for the true prize she is and started getting her sea ready and soon she was crossing the Atlantic to America in 1998.Traveling in 1998 around the Cape and crossing the Atlantic, GREY MIST arrived in Texas where she underwent an extensive refit, from 2003 to 2011 and the current owner's restoration from 2016 to the present, restoring her to the brilliance of her past years while modernizing her with today's advanced equipment. Now GREY MIST is traveling to Ft Lauderdale Florida where she will be offered for sale in the yachting capital of the world. Come and see this magnificent restoration of this classic motor yacht.

Down one deck level from the wheelhouse is the main level. Starting forward is a private stateroom with centerline queen berth, plenty of closet space, and a private head. Heading aft is the entrance foyer to Grey Mist with steps down to the guest accommodations.

The main salon of GREY MIST is one of its most stunning features. It hosts a large built in solid Mahogany bar and custom ornate table that can seat 8. At the end of the table is the ship's original brass compass and binnacle. The whole main salon is encompassed with built in settees running the length of either side, and at the aft end of each settee is a Samsung 40" flat screen TV. The salon is also home to the ships bar which boasts an Edgestar reefer, 2 Ice O Matic ice makers, a stainless steel sink, and ample storage space.

After GREY MIST crossed the Atlantic to Texas the previous owner began, in 2003, a complete refit to restore GREY MIST to the luxury and elegance she was designed with when she first launched. All areas of the boat were carefully inspected and refitted as needed. Below is a short list of some, but not all of the work that has been done.

GREY MIST's wheelhouse located on the top deck boasts a fantastic view. The helm overlooks a 36" wheel and array of modern electronics. Walking aft of the helm is a private head. Located further aft is the master suite. There is a full centerline queen berth, plenty of storage and closet space, and the master head has stand alone shower, sink and Dometic Sealand electric head.

United Yacht Sales is pleased to assist you in the purchase of this vessel. This boat is centrally listed by Bradford Marine Yacht Sales. It is offered as a convenience by this broker/dealer to its clients and is not intended to convey direct representation of a particular vessel. The Company offers the details of this vessel in good faith but cannot guarantee or warrant the accuracy of this information nor warrant the condition of the vessel. A buyer should instruct his agents, or his surveyors, to investigate such details as the buyer desires validated. This vessel is offered subject to prior sale, price change, or withdrawal without notice. 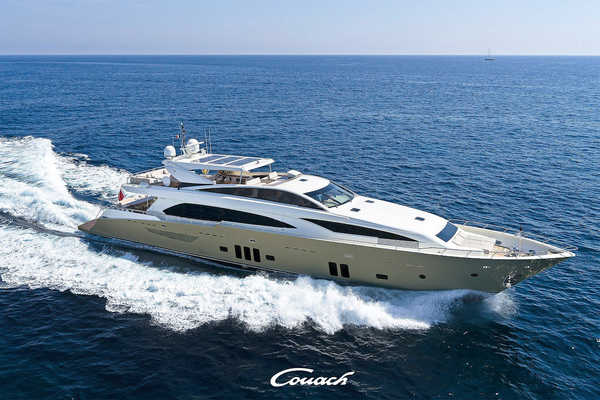